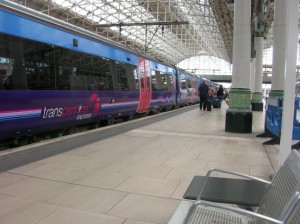 I have had a mildly entertaining journey to Hudderfield, UK (between Manchester and Leeds). For those of you who may not know, I am traveling there for the 2011 ICMC (International Computer Music Conference) because a piece of mine (Metallurgy) was selected for performance.

I have a few comments about mass transit, which ultimately is very good. I wish the United States had a halfway decent public transit system. What I find amusing, however, is that the British themselves don’t seem to understand how to use it.

I had purchased my train tickets previously online and printed them at a ticket kiosk. That was the easy part. Apparently, my ticket was sending me to Manchester Piccadilly Station, then to Huddersfield, despite the fact that there are many direct trains from Manchester Airport to Huddersfield. That is fine, I paid £4 for the ticket – you get what you pay for.

Apparently, all of the trains stop at Manchester Piccadilly on their way across the UK, thus I could take any train to Piccadilly station (according to a woman at the ticket counter). As I boarded a train leaving at 11:00 am, I was informed that I was boarding the wrong train. The man gestured to the other side of the station, saying something about 11:20. The only other train in the station left at 11:03. I started boarding it, but asked another man about the ticket. He pointed back to the 11:00 train, stating that THAT train was the proper train. On my way back over, the first man shook his head, and pointed to an empty platform, again mentioning 11:20. Another man took my ticket and reaffirmed that I was to board the 11:00 train, but get off at the first stop.

Once at Manchester Piccadilly, I asked a person from which platform my train was leaving (Remember, Manchester Airport to Huddersfield: 12:02). He took the ticket and told me Platform 13, but then asked another man, who informed me that it was Platform 3. I went to Platform 3, but saw no mention of Huddersfield (which ONLY mentioned a town called Hull). I went to the large departure board, but the only Huddersfield it listed was an 11:45 train. I finally asked a man at the information booth, who informed me that my platform was indeed Platform 8. It was, and I made it to Huddersfield just fine.

If this post is confusing, then you have some idea of the bewilderment I have experienced today. Keep in mind that all of the people I talked to today were employees of the station or the railway. If they can’t figure out my tickets, then how can a stupid American with very little mass transit experience do so?

On a final note, I have to give Kudos to the Harry Potter movies, which clearly showed that British class distinction can be derived through accent. All of the high wizards and professors (and Hermione) have clearly enunciated accents and are easy to understand, while the youths and lower class citizens (the Weasleys for instance) all speak a fast dialect that is impossible to understand. It is all true. I can’t understand a word a Brit says when he is talking to another Brit.